(This post originally appeared on the main True Ventures blog)

Recently, there have been a number of thoughtful blog posts on different models for funding emerging opportunities in human health and biology:

Biotech Researchers Venture Into the Wild
by Jorge Conde

The $100 Trillion Opportunity
by Arvind Gupta

The Creation of Biotech Startups: Evolution Not Revolution
by Bruce Booth

All are excellent posts, and I recommend reading them if you’re interested in this market. I won’t rehash what they’ve already covered, but I would like to share True’s perspective and how we’ve approached investing in this emerging ecosystem.

Our focus at True has always been to fund the very best founders wherever they’re spending time. In 2005, many of these individuals were building new consumer products and media services on the web. These were enabled by new platforms, open-source software tools, and infrastructure services, which allowed for lower-cost tinkering and easier initial experimentation with new, bold ideas.

Over time, we’ve seen many of the same forces draw founders into other markets including infrastructure software, consumer hardware, human health, biology, and more.

In 2012, we made our first investment in this space when we funded Moleculo. The company was founded by Mickey Kertesz and Dmitry Pushkarev, two individuals with dual PhDs in biology and computation. As part of their research at Stanford University, they enabled long-read sequencing of DNA with a combination of tagging and algorithms using existing Illumina hardware.

When we met with them, we were unsure if Moleculo was the type of investment we’d make. Our firm didn’t have any direct experience with biology or DNA sequencing. However, we were captivated by several facets of the investment, which matched our sweet spot at True:

1. The founders had unique cross-discipline expertise which let them view the opportunity in a new way.

2. We were introduced to the founders by members of the True community whom we trust.

3. The founders had incredible ambition to reshape a big market by initially focusing on a small initial wedge.

As we spent more time with the team, we recognized that many of the same forces that enabled our earlier investments in software and media startups were in play here as well and could enable the company to reach meaningful milestones on fewer initial investment dollars.

Mickey introduced us to the founders of our second and third investments in this space. We source more than 50 percent of our investments from True’s founder community and take these organic introductions very seriously.

Josh Hoffman, Zach Serber, and Jed Dean previously worked together at biotech company Amyris before leaving to start their own business, Zymergen. The Zymergen team showed us that biotechnology could create an incredible number of new products and propel biology beyond traditional markets in healthcare.

Colleen and her Co-founders Jim Bullard and John Eid worked together previously at PacBio. They started Whole Biome to leverage their skills in long-read sequencing to understand and develop therapies for the gut microbiome.

Building on our experience with Moleculo, Zymergen, and Whole Biome, we’ve since made more than 26 investments in companies focused on human health or biology. We’ve also established a strong relationship with life sciences accelerator IndieBio, which has proved to be a great match.

Over time, we’ve gotten better at understanding the types of businesses that will and won’t work with our funding model. Here are a couple of thoughts that drive our decision making in this space:

This is our north star at True. We believe that by backing the best, ambitious founders early, we will generate the best returns for our limited partners over the long term.

An example is Deep Genomics, an AI-driven drug development platform focused on genetic medicine. Deep Genomics Founder Brendan Frey is a world leader in his research field, which lies at the intersection of deep learning and human genetics.

Even though he had never run a company, we believed Brendan’s background made him uniquely positioned to be a founder and build a team around him over time to support the company’s long-term goals.

Similar to Brendan, we believe there is a class of incredible scientists out there who have the capacity to grow into leaders of a next wave of biology and health-driven companies, and we want to meet more of them.

We believe there are an incredible number of large industries that will be disrupted by startups initially focused on reinventing small segments of those markets.

While the last century was dominated by petroleum-based materials and products, we think the next few decades will be defined by a more natural approach that uses biology as a technology platform. Zymergen, for example, is exceptional in creating products based on biology that were traditionally made with harsh chemicals.

We’ve also invested in companies at the other end of the value chain that are building new types of brands on top of these innovations in biology. Prime Roots Co-founders Kim Le and Josh Nixon are creating an alternative protein using fungi. These founders see a path from here to there and need a small amount of capital, support, and encouragement to test their ideas.

Look for outliers along the edge of emerging markets.

We’ve focused on areas with product or market risk that we don’t believe fit the traditional biotechnology model. Our goal hasn’t been to compete directly with the existing firms in this space, but to follow founders into other emerging areas where we may have a different perspective.

One example is our investment in Vital Labs, which is taking a ‘software-centric’ approach to cardiac care for patients. Its initial product is a mobile application that uses the camera on smartphones to measure blood pressure. In the short-term, it lets the company get the product to market faster by not needing to ship a hardware device. Long term, we believe it gives the company the opportunity to provide better care by being able to more easily layer on additional services and biomarkers.

Another example is our investment in Filtricine, which is developing a non-drug treatment for cancer by using targeted nutrient deprivation. The founders at Filtricine developed their product as researchers studying metabolic disease at Stanford. This experience, combined with their previous work in developing traditional therapeutics, led to Filtricine’s differentiated go-to-market plan.

Both in the True portfolio and through spending time with IndieBio, we’ve been amazed at the large number of markets founders have attacked. These include food, beverage, packaging, materials, medical devices, consumer products, and more.

Going forward, we think we’ll see even more convergence – not less. The book Complexity: The Emerging Science at the Edge of Order and Chaos by M. Mitchell Waldrop examines the magic of new ideas lying at the intersection of two or more fields of study, which we believe will continue here. Ultimately, that innovation is driven by the best founders who see the world in new ways, are curious, and want to try something new.

We remain active investors in great founders who are solving big and important problems in human health with biology. If you’re working on a solution at the intersection of multiple spaces and envision using biology to improve lives, we’d love to talk. 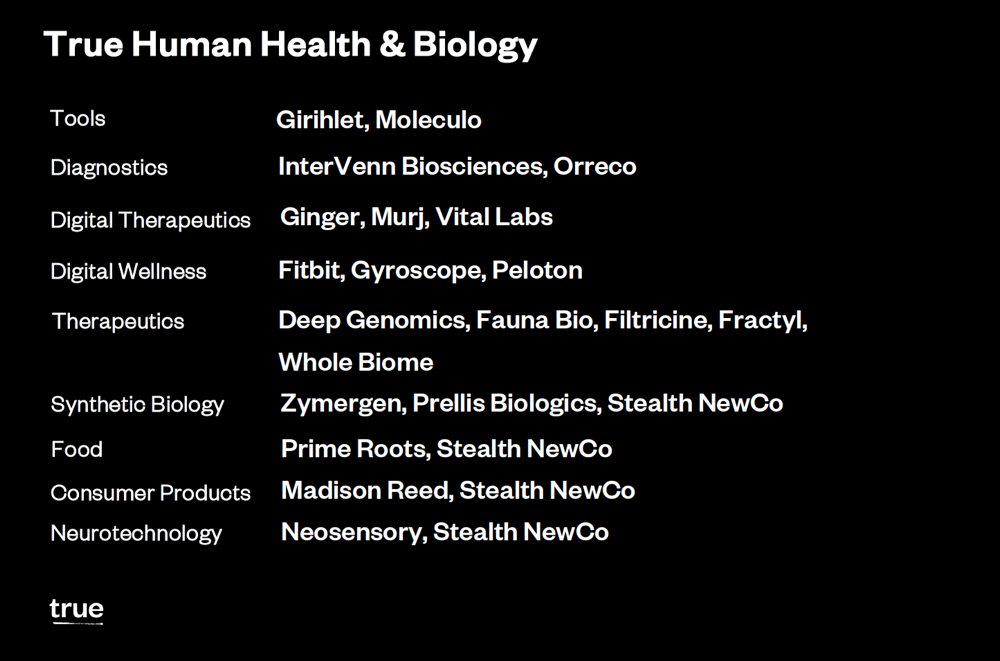